SO! It’s a 3 day weekend and I’m shattered and feel like I’ve been busy busy!

On Saturday we went to Dan’s for his little sisters 18th, they went for a meal but I had last minute plans with some friends so went there instead! I wore this really cute navy and white play suit from boohoo and a denim jacket to dress it down a bit, i also had a double belt on from Toyshop. For once a belt actually fits me properly.

Me, Phoebs, Tom and Keable went to Nandos. They didn’t check how our food was and it made me sad. We were literally just going for a quick Nandos and a catch up, and this somehow turned into bowling. They had no lanes, so this some how turned into a night out instead..

Phoebs was busy so it was just me Tom, Keable and Alex joined us after he got back to Leicester. We invited Billy but he was busy. So it turned into just us four.

Keable accidentally somehow found a Nandos chicken, We named the chicken Nunny and this chicken then came on a night out with us..

We had pres at Ashleigh Road for what could be the last time ever. (This is VERY heartbreaking), i had about 2 or 3 drinks and then Tom did the usual of picking me up off the bathroom floor. We dusted me off and then headed into town.

They JOKED about us walking there, me, walk? Haha. It’s still funny thinking about it now.. 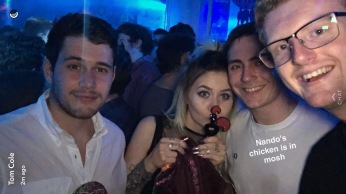 Alex found this birthday badge which he then wore for pretty much the entire night..

We left, then went to McDonalds and headed back home. We ate drunk mcdonalds, i borrowed a t-shirt and watched Chicken Run. Chicken Run then turned quite deep and into politics and was compared to a concentration camp at like 4am. I can’t really remember much of this..

I got the taxi driver to pose with the chicken… i think we paid him extra for this?

See.. still have the chicken..

On Sunday i made in home about midday, i slowly but surely climbed into bed and went to sleep.

I eventually got woken up to my mum telling me we were going out for dinner.

I wore a similar outfit to yesterday but a white play suit instead. They’re super comfy and only £14 at the moment too with free next day delivery.

We went to “The Otter” it was really nice but i don’t think much to the service. They bought my stater out with normal bread even though we’d checked repeatedly. They took it back and then bought the same starter out with crumbs all over the plate and Gluten Free bread separate. This may not seem like a big deal, but anyone who’s medically Gluten free can tell you it is..

They’d ran out of roast dinners too, so i had a lamb shank instead. 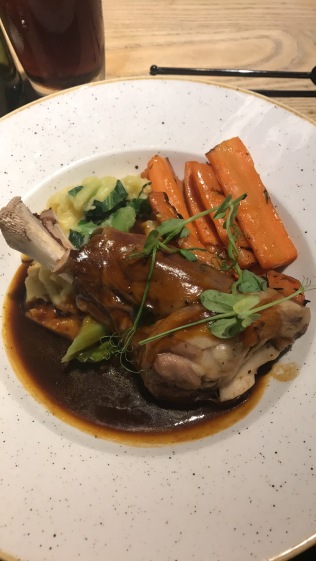 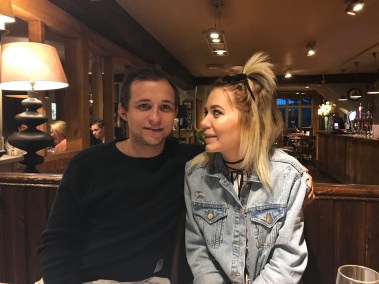 I had a hissy fit at the table cause The Otter has the BEST puddings, and they’d ran out of everything gluten free. I legit felt like crying… but no! The waitress found me the last 2 pieces of Gluten Free carrot cake and put it into one MASSIVE piece. Safe to say i had to adjust my belt after eating all this..

Look, another cute photo. I have a round face and Dan was actually pinching me in the back here..

BETTER THOUGH! I’d gone through this entire hangover day and then my mum bought this bad boy to me… 36 packets of my favourite crisps. 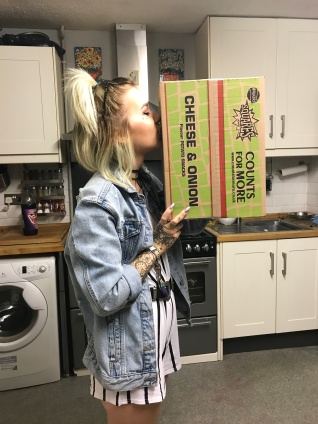 Today i woke up and i’m yet to get dressed. I still have stomach ache, i’ve watched way to many films and picked at food all day.

I have work tonight and I’m seeing Nathan in a bit to catch up too!