Here you are again, at my little corner of the internet, so here is a quick #SundayFunday blog post as it’s been a while!

We had a lazy night on Saturday which consisted of way to much “Bates Motel” on Netflix (My new obsession) and some Christmas films. We were supposed to go to Birmingham to the Christmas markets but the weather had other ideas, so we’ll try again next week!

We woke up on Sunday and theres was a solid 4-5 inches of snow.

I Live in the sticks (middle of nowhere, in a little village) and we’re at the highest point in the county, so where ever anyone else has snow or rain, we always get it 10 times worse.. So, it was time to get the cold comfy clothes out, and enjoy the snow! 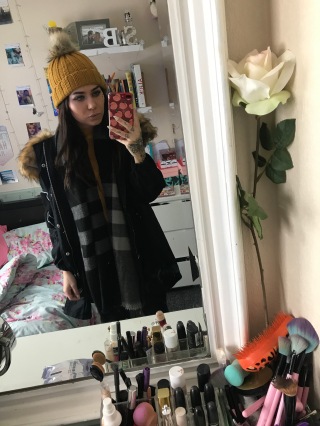 I got this super cute coat, with the furriest hood from a little internet boutique shop, but theres very similar on boohoo. I love these beanies too! They’re like £3 each from primary and they have so many different colours.

My step dads sister has gone away, so we had her puppy as well as ours, they look cute but it was hard work walking them together and trying not to fall over! (Follow Smiffy on instagram – @ SmiffyTheShihtzu and keep up to date with his daily life!) 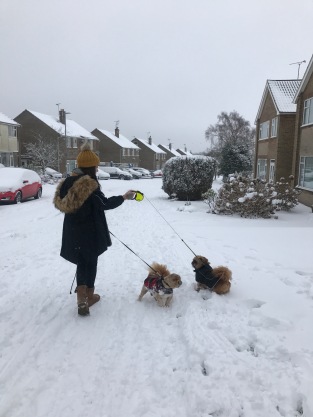 If your boyfriend isn’t your personal photographer is he even your boyfriend? He uses the portrait camera on my phone so much better than i do!

This was the snow at the start of the day, we had 3 more blizzards since this photo was taken..

Look how cute our back garden looks covered in snow? Yes, that is a full nativity scene in the play house. Oakfield goes OTT for Christmas when it comes to decorations!

We took my little nephew to the beach in the summer and me and my mum showed him how to build sandcastles. He’s 2 in January and he’s totally obsessed. So my sister got his bucket and spade out for him.. Most people build snow men, but he built snow castles instead! 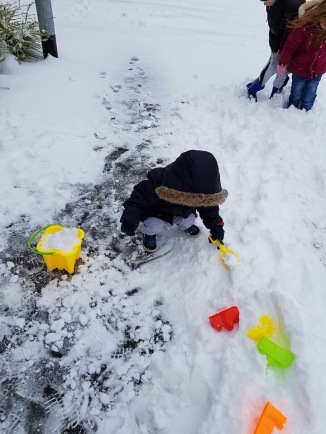 Look at our garden in the dark. It’s literally so cute at Christmas! Theres so many lights and theres nothing better than sitting in the conservatory with the heating on and looking out!

Safe to say after a freezing day, we climbed into bed and had a movie night, and there was nothing better! We we’re freezing so we lit all the candles, had a snug and ate our body weights in food. – The perfect date night.

Next week we have a busy weekend. It’s my last event of 2017, Birmingham Christmas markets & shopping AND furniture shopping for our bedroom

.. if the weather lets us that is!