Everyone loves Starbucks, and I for one refused to quit my habit just because I was diagnosed with Coeliac disease and was put onto a Gluten Free diet.

I went into town last week and went to Starbucks and was pleasantly suprised with their new Gluten Free Chicken and Pesto Panini – So decided to find out which products are gluten-free, and which have gluten in them?

Starbucks is one of the most cautious places i’ve ever been to when it comes to cross contamination. According to the company’s corporate customer service personnel, nothing prepared at the stores is considered gluten-free due to the possibility of cross contamination from gluten-containing products and ingredients.

Starbucks is, however, gradually adding gluten-free food items to its menu. Most stores carry a gluten-free breakfast sandwich, or gluten free packaged snacks. So theres always something.

Although you should check the label of anything you’re considering buying to make sure it literally states “gluten-free,” since ingredients change all the time, and realistically – we’re never told.

There appears to be a good reason for avoiding flavored drinks. If you look on the internet many people have reported being “glutened” by various flavored coffee from Starbucks.

However, plain coffee drinks (espresso or brewed coffee) seem to be gluten-free to well below 20 parts per million. Some have also had good luck (me included) with milk-based drinks such as cappuccinos and lattes.

There’s on off info on whether Starbucks’ frappuccino mix contains gluten. Regardless, other ingredients (such as the java chips and some of the sprinkles) definitely contain gluten, and the equipment to blend those drinks is simply rinsed, not cleaned thoroughly, in between uses – so i guess this makes it a threat.

If you must have a frappuccino-style drink, stick with the bottled, gluten-free-labeled options.

Starbucks doesn’t provide ingredient lists for its various syrups and other mixes used to create beverages such as the holiday Pumpkin Spice Latte and Caramel Hot Chocolate, in part because ingredients can vary from store to store and at different times – but if you ask the staff they’re always more than helpful to help you.

When it comes to the Pumpkin Spice Latte and Starbucks’  holiday drinks, as of late 2017  it doesn’t contain gluten ingredients, but the syrup and toppings could be subject to cross-contamination in manufacturing.. So i guess it’s up to you if you want to take that risk or not.

The bottom line: plain coffee or espresso-milk drinks may be okay, but blended and flavored drinks are extremely risky.

Starbucks have recently changed their Soy Milk. This now contains oats which means if you’re also sensitive to oats, you need to take this into consideration. I’m lucky, i don’t have an issue with dairy to this could be a dilemma.

Starbucks has added a gluten-free Chicken and pesto panini and it’s beaut. It’s a little soggy but has plenty of filling. It’s soggy because they heat it in the packaging to avoid cross contamination. 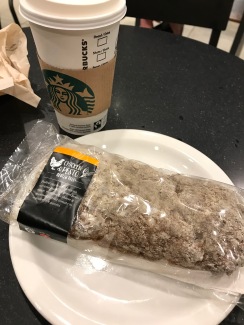 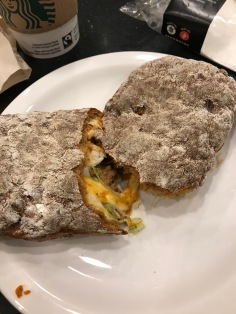 Theres also a gluten free brownie in the bakery case – they’re out of the wrapped and surrounded by other cakes. If you ask for one from the fridge, they’ll happily get you one which is individually wrapped – this way you know theres no cross contamination.

Starbucks has been slow to address the demand for decent gluten-free snacks (to say the least). It rolled out a gluten-free brownie, which is really tasty. But before the Chicken and pesto panini it was always a vegan alternative that was gluten free – Give me some meat! Just because i follow a gluten free diet doesn’t mean i follow a vegan diet too!

Starbucks also offers a few individually wrapped bars next to the till, which are prominently labeled gluten-free.

In the packaged food section of several Starbucks, I’ve seen a packaged “protein box” that’s labeled “wheat-free,” with no other information provided on its possible gluten content. Soo… realistically any sauce or flavouring in their could have gluten in.

With Starbucks, i’ve learnt it depends which branch you go to, the one at work is amazing, the one in the town centre – not so much so. All in all, Starbucks are trying and they’re slowly but surely getting there!