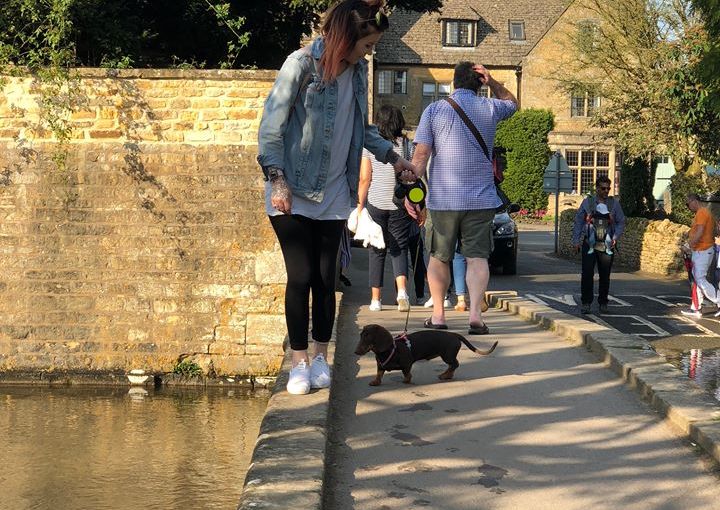 Hey! – As much as i’m trying to remember to blog more it’s REALLY hard to find things to actually blog about at the moment..

I know it’s not a “Sunday Funday” but i’m going to class it as one!

So! Dan and I managed to get a 4 day weekend together this week, we went to a gig on Thursday, had a lazy Friday until Tommy (@Tommy_the_sausage) got dropped off to spend the weekend with us whilst his Mom and Dad went to a wedding. 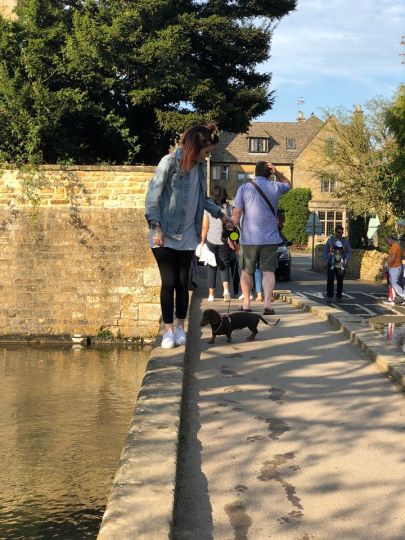 We’d had really nice weather on Wednesday, Thursday and Friday so we thought we’d take Tomtom to Matlock or to the coast. Turns out when it came to Saturday the weather wasn’t going to be as good – so my Mom, being the angel it is, some how followed the nice weather and worked out where would be best for us to go.

My step dad grew up in the Cotswolds so he was more than happy to come with us – this date day with Tomtom turned into a family day, but this was clearly for the best, as me and Dan would have just got lost..

We walked up to Broadway Tower, and went up it. £5 each to go up was rather steep if i’m honest.. it was interesting, don’t get me wrong, but it wasn’t £5 each interesting.. Dan forgot to tell my mom he was scared of heights.. so up he went being massively brave and then panicking at the top.. oooops!

We walked back to the car and found some sheep.  Tommy hadn’t seen sheep before… turns out he does NOT like sheep!

He was a bit happier about ducks though.. until he tried to chase the bread that we were throwing into the river at one point..

We went to a pub for lunch, the menu was pretty decent for gluten free options, but i really fancied a cob (yes it’s a cob, not a roll, a bap, a tea cake or whatever else! It’s a cob!). I didn’t expect them to have gluten free bread to be honest. I settled on some home made potato wedges with cheese, smoked bacon, a side salad and sour cream – I LOVE sour cream so this totally worked for me, it was super yummy! 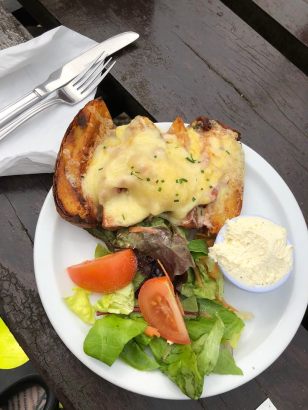 After lunch, we walked into broadway and i found a chocolate shop, it was amazing! so much of it was gluten free too! 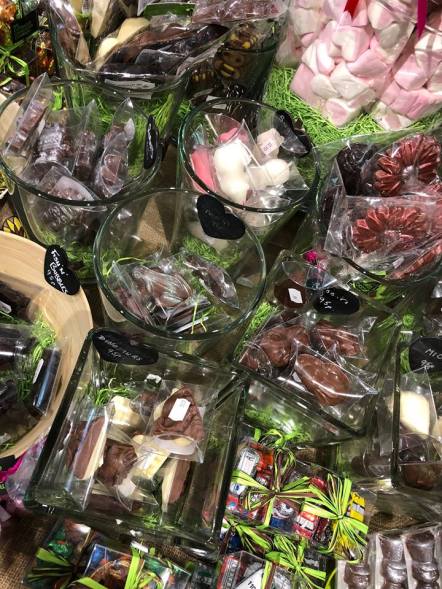 When we got to bourton-on-the-water we found my fave sweet shop. I ended up buying shrimps, chocolate sea shells, rosey apples, rhubarb and custards and pear drops. I LOVE an old fashioned sweet shop – can you tell?!

Walking a bit further, we found a Christmas shop that was open the entire year. I was in my element…

I bought these chocolate Bees for me and my friend Charlie (IG @BeeFreeFromGluten) -I’ve already eaten half of mine, they’re SO good!

Tomtom had tired legs so he was carried around a lot.. we pretty much mastered him being on my hip like a child to be honest!

He was really good at the table too! 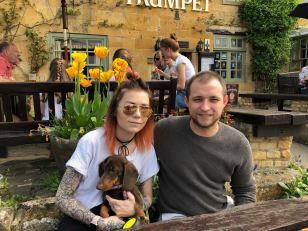 Look at my chocolate sea shells from the chocolate shop – they were filled with praline.. they were amazing.. which is clearly why i only gave one to my mom and ate the rest myself… in one sitting.. i got 12…

We’d walked miles around The Cotswolds, Bourton-on-the-water and broadway, so we went and found a little pub near the river. 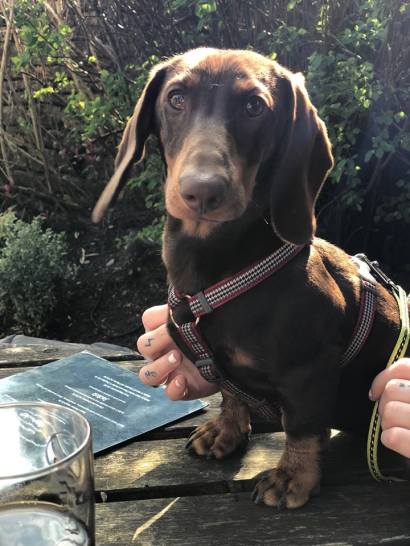 It was called the “Kingsbridge inn” and it was awful..

They didn’t have a single thing on the menu that was gluten free. When i asked they just shrugged and were the opposite of helpful and the staff were more bothered about hanging out with their friend in the beer garden and swearing about other customers then actually helping us… I put a message on the facebook page, they told me i had to download and app and ask for help.. we did, they didn’t help.. i really wouldn’t recommend going here at all… walk a bit further and go to a tea room or a different pub instead!

We ended up having a drink and walking back to the car, Dan took tommy cause my arms were tired..

Have you ever looked at your OH and thought, yeah i’m pretty lucky.. this is me right now.. You the real MVP.

We had an ice cream each as the weather turned out pretty nice, Tommy obviously just had to share with Dan! 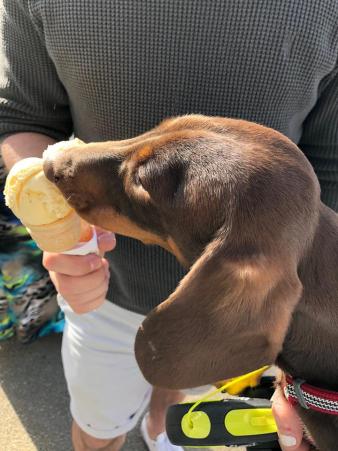 All in all, it was a really nice day and we all had a really good time. Including Smiffy and Tommy!

Next week we’re going on an adventure.. kinda.. and Dan doesn’t know where..